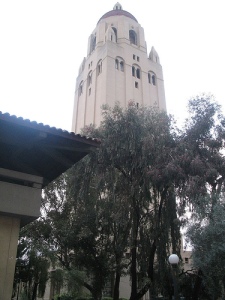 As reported on cearta.ie: ex-Taoiseach (Prime Minister) of Ireland, Brian Cowen, is potentially pursuing a complaint against The Mail On Sunday for publishing a story about his return to education. Mr Cowen enrolled himself onto  a $58,000 Executive Program (for ‘senior executives‘) at Stanford University.

Mr. O’Dell makes a very persuasive prediction that the complaint would not be upheld by the Press Ombudsman or the Press Council of Ireland because of the Public Interest in the story due to Mr. Cowen’s status as a public figure, and the fact that photographs were taken of him on the University Campus which is a public place. Just to be difficult I am going to put forward a case for Mr. Cowen, and consider how the complaint could be upheld. Whatever the decision may be, it will have a profound effect on the privacy rights of those who once held a public office. Which is particularly pertinent at a time when the Irish media are wanting to expose blameworthy conduct which has led to the Irish Republic’s economic collapse.

The Case for Brian Cowen

Under Clause 5.5 of the Editor’s Code of Practice:

Taking photographs of individuals in private places without their consent is not acceptable, unless justified by the public interest.

The question is whether Stanford University is a private place. Mr. O’Dell makes the observation that although the University is private property, this does not make it a private place. This may be due to the fact that by walking through a populated college campus a person could not possibly say they are away from ‘public view.’ The Strasbourg Courts have stated that a right privacy could still be expected in a public place, if a person believes they are out of the public eye. If there is an expectation on private property that a certain level of privacy would be maintained this may turn what appears to be a public context into a private place. A classroom, where one of the pictures of Mr. Cowen was taken, was a public context as he was sharing the room with various members of the public that he did not share social or familial ties with. Yet, many classrooms will prohibit the use of photography and mobile phones which will then contribute towards a certain expectation of privacy.

However, the Press Ombudsman takes an extremely narrow view in relation to Clause 5.5, and it would certainly be highly unlikely that Mr. Cowen would succeed on this point. As he stated in Coughlan and the Irish Mail on Sunday in November 2011;

Although the taking and publishing of the photograph on this occasion was evidently most unwelcome to the complainant, it did not reveal any specific details of his private life and circumstances, and his location at the time that the photograph was taken was in public view. In all of these circumstances, there was insufficient evidence to support a decision that Principle 5 had been breached.

This seems a somewhat mechanical application of this clause. This would mean if a member of the public could potentially see you, then you would no longer be in a private place. This interpretation of Clause 5.5 seems somewhat arbitrary, and differs significantly to the more nuanced approach of the Strasbourg and UK Courts where the expectation of privacy held by the claimant is relevant.

Public Figure and the Public Interest

The Editor’s code of Conduct recognises that the private and family life, home and correspondence of everyone must be respected (5.1/ emphasis added). Even public figures are entitled to privacy (5.4). However, the right to privacy should not prevent publication of matters in the public interest (5.2). Clause 5.4 elucidates on what might be in the ‘public interest:’

where a person holds public office, deals with public affairs, follows a public career, or has sought or obtained publicity for his activities, publication of relevant details of his private life and circumstances may be justifiable where the information revealed relates to the validity of the persons conduct, the credibility of his public statements, the value of his publicly expressed views or is otherwise in the public interest.

Mr. Cowen no longer holds public office, nor does he deal with public affairs or follow a public career. Although, he did in the past. Which would place him within the definition of “a person…[who] has… obtained publicity for his activities,” while he was in public office. However, publication will only be justified in such circumstances where the information is relevant to the validity of certain activities conducted by him (be it his general conduct or views expressed) whilst in public office. It is difficult to connect information relating to Mr. Cowen’s college activities, such as eating lunch and attending lectures, with the validity of what he had done in public office. If Mr. Cowen questioned the US education system, the situation would obviously be different. As to whether the university was “private life,” I would prescribe to the Von Hannover view that

private life… includes a person’s physical and psychological integrity… [respect for a person’s private life is] intended to ensure the development, without outside interference, of the personality of each individual in his relations with other human beings. [50]

A person’s education is clearly part of this development.

Clause 5.4 has one further justification for publishing information relating to the private life of a person who has obtained publicity-  where it “is otherwise in the public interest.” The Preamble of the Code states that:

I cannot see how Mr. Cowen’s attendance at Stanford University is capable of “affecting the people at large” unless he was using public funding to pursue this education.

If the decision was upheld…

If the decision was upheld it might not only change the nature of the privacy rights of public figures out of office, it may even lead to further litigation by Mr. Cowen himself. There have been some question marks over who is paying for Mr. Cowen to go back to college. It was reported in The Mail on Sunday:

Stanford had hosted 60 chief executives from Irish IT and life science companies under the Enterprise Ireland leadership for growth programme, all subsidised by the Irish taxpayer.

The Sunday Independent found that;

A day after publication, other media reported friends of Mr Cowen to the effect that the former Taoiseach had himself paid to attend the course and that the implication that Enterprise Ireland had part-funded the course was completely untrue.

If Mr. Cowen believed that the story run in the Mail inferred that he was paying for his fees by way of ‘Enterprise Ireland,’ and such an inference was false, he may wish to pursue an action in defamation (which is not covered by the Editor’s Code of Practice, although truth and accuracy is). The relevance of this is that under section 26 of the Defamation Act 2009 (the defence of fair and reasonable publication) the court may have regard to the determinations of the Press Ombudsman and the Council. Mr. O’Dell may, therefore, be too quick to vocalise his relief that Mr. Cowen is pursuing this matter outside of the courts. It may be just the beginning. Personally, I would welcome a decision by the Ombudsman that would not uphold the complaint. However, Mr. Cowen could potentially have privacy on his side.